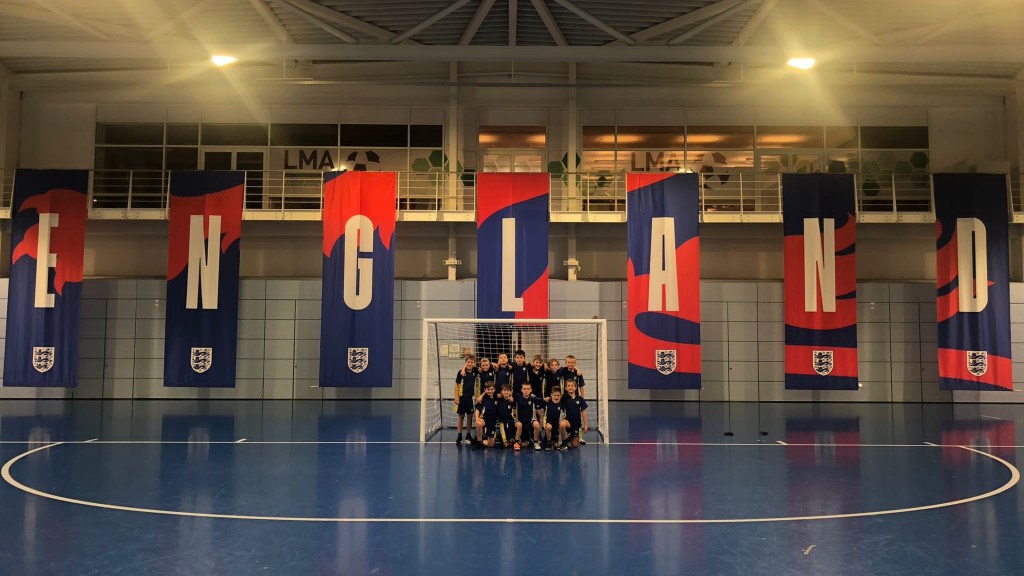 Most of the team travelled the 3 ½ hours with their parents, to the Hilton at St George’s Park, Burton-on-Trent on the Friday night. It heavily rained the whole way and we arrived late; we were tired but also really excited.

St. George’s Park is England football team’s training ground and is also home of the Football Association (FA). There are 12 football pitches that include the David Beckham pitch, which we played on. We were staying at the Hilton hotel which is right in the centre of the park.

Our football team had been invited by the event organisers after we won the ISA U10s Championships last year. The Prep4Sport formula is simple. Two-days of balanced competition with everyone enjoying the same amount of game time whether you win, lose, or draw. One team will go home champions, but every team will have the competitive experience to the very end and be guaranteed to create memories which will inspire a lifetime of sport. Included in this wonderful weekend of football was the use of the hydro-therapy pool and an evening of futsal against other schools and use of the games room.

16 teams from schools all over the country took part. The matches were 12 minutes each way. The teams were split into four groups of four. The top two would go into the Championship and the bottom two of each group would go into a Plate.

The sun was shining! We had a walk around to see where the actual England team trained, it was humungous and the size of Wembley! Some of the best pitches I have ever seen and played on! The rest of the team arrived, and we all ate a picnic lunch together with our parents. Then we were raring to go!

We won our first and third games with ease and confidence, the second game was a little more challenging, however, we were glad we drew, and it wasn’t a loss. St Margaret’s had made it through to the knockout stages of the Championship, which was taking place the following day. Time for some fun! We had the chance to play futsal and do hydrotherapy, which was very fun and competitive. The food they served us for dinner was delicious!

After a restful night’s sleep and a huge breakfast, the team were ready to take on the day. We knew the Championship was going to be tough for us as there were teams who had bigger squads to choose from.

The first game of the day saw the St. Margaret’s team cruise to victory. In the game that followed we faced our strongest opposition yet. ‘The Hall’ had won the competition for the last 3 years. Every one of us fought like we had never before, however, we lost which was the first defeat out of all 5 games so far. We went for lunch as we needed to come back stronger for our final game.

Our last game of the day was against Fulham Prep, and this was also going to prove to be an extremely tight game, we went 3-1 down at half-time. After a quick motivating pep-talk from Mr Lunn we were back into the 2nd half and came out fighting. Two goals were scored by St Margaret’s which made us level. With not even a minute to go a late strike by Fulham Prep saw them win the game and come 3rd in the overall competition. We were heartbroken.

The final places were announced, St Margaret’s had come 4th out of 16 schools taking part. Both of us are so proud of each and every one of the team, we really did give it our all. We had a wonderful time and we’re sure everyone learnt something from the experience. Special thanks to Mr Lunn and Mrs Hawes for organising and looking after us and also to our parents for coming along to support us.

Here are some of the players thoughts:

Freddie: “The experience was awesome, I loved playing futsal and normal football with my friends.”

Dylan: “It was a great experience; the food was delicious, and the hydrotherapy helped me with my injuries.”

George: “The hotel was brilliant and playing football even better!”

Hugh: “I enjoyed playing football and futsal with my friends.”

Harry: “This was an experience I will remember forever, and I enjoyed every single bit of it.”

Louis: “It was an amazing experience and to take part is another achievement.”

Max: “The benefits of the trip were amazing. The experience was great, and my favourite part was playing in the highly competitive matches.”