Gosfield doesn’t appear in the Domesday Book of 1086. At that stage, Gosfield was part of the Lordships of Hedingham, Halstead, Bocking and Wethersfield.

From Henry II’s time (around 1180), our part of Gosfield became the Manor of Bellowes. The first village church was built around 1190 by Aubrey De Vere, the 1st Earl of Oxford, whose father built Hedingham Castle.

The present church, St. Catherine’s, was built in place of the original by Sir Thomas Rolfe in 1435 when Henry VI was King of England. It is he who Green House is named after. He also built the original Gosfield Hall, which was then called Bellowes Manor. Thomas Rolfe was a Sergeant-at-Law. This meant he was one of the most powerful lawyers in the country. He is buried in the church and on his tomb is a very important brass. It shows him in full academic Sergeant-at-Law dress and a Latin inscription describes the uniform he would have worn. This is one of the only existing records of this in the country. His daughter, Edith, married John Green. On Rolfe’s tomb it says he was ‘a flower among lawyers’. Some people say it refers to a poisonous flower because he could be an unpleasant man! 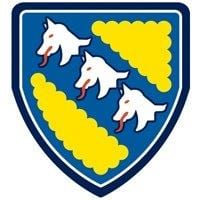 Rolfe’s Great-grandson was Sir John Wentworth. In 1545 he built Gosfield Hall as we know it now. Yellow House is named after him. He was a member of Cardinal Wolsey’s household and became High Sherriff of Essex and a wealthy landowner. Sir John Wentworth entertained Queen Elizabeth I who became a good friend of his daughter, Anne. The Queen continued to visit the Hall after John’s death in order to see Anne. Wentworth rebuilt the small chapel on the side of the church which is still known as the Wentworth Chapel today and used as the vestry.

In 1715, John Knight bought the Hall. Blue House was named after him. He was the Member of Parliament for Sudbury. He rebuilt the North, South and East sides of the house. On his death, his wife had a huge monument of him in Roman clothing made and placed in the Wentworth Chapel where it still stands today.  The writing at the top is by Alexander Pope, a famous poet and friend of the family.

Not long after John Knight died, his wife married again. This was to an Irish politician and poet called Robert Nugent. Nugent was a Member of Parliament. Red House was named after him. He was an important politician. There is a picture in Gosfield Hall of him painted by Thomas Gainsborough, the famous artist from Sudbury. He also built the mile long lake which was originally in the grounds, but is now privately owned, and used for waterskiing as well as Open Water Swimming.

Nugent was Controller of the Household of the Prince of Wales. Nugent lent the Prince a lot of money which he never repaid. George III made him Earl Nugent and Viscount Clare to make up for this. He became Lord of the Treasury, Privy Counsellor and First Lord of Trade, all very important positions. He was also a poet and friend of Oliver Goldsmith, the famous poet and playwright. While he was sleeping in a chair, Nugent’s daughter tied his wig to the back of the chair. When he got up, his wig fell off. He found it so amusing that he used it in his famous play ‘She Stoops to Conquer’.

The other important event at the Hall happened on 1807. Britain was at war with Napoleon in Europe. The King of France, Louis XVIII, was in exile and came to live in Gosfield Hall for two years with his court. Also, at about this time, the owner of the Hall, Earl Nugent’s son-in-law, the Marquis of Buckingham, introduced straw hat making to the village. Many people did this and earned good money. Soon, the industry spread throughout North Essex. We celebrate this today by the girls at St. Margaret’s wearing straw boaters.

After the Lowe family sold the Hall in 1946, Mrs. Peggy Lowe maintained ownership of the Coach House and stable block. She was unable to find a suitable private school for her young daughters, Margaret and Elizabeth, so she decided to start one for herself. Therefore in September 1946, with ten children, she commenced her school in the stables and coach house to Gosfield Hall, which had been converted into classrooms.

During the Second World War, the buildings had been used as the section office, store and guardroom for the Royal Signals. Rumour has it that the Royal coaches were kept here to protect them from the blitz in London.

The family still has a strong connection with the school. When the school hall, called Lowe Hall, and the buildings we use today as our music pods and boys changing rooms (originally science and art rooms) was opened in 1991, it was Mrs. Lowe who officially opened it for us.

The Lowe Family Crest, which is featured on a beautiful stained glass window in St. Catherine’s church is the basis for our school badge.

In 1961 the school was sold to W.A. Lindsey Coulbourn MBE, B.Sc. (Econ) and continued as a co-educational day school for children from 4 – 11 years of age with more than 100 pupils. Boys, reaching a sufficiently high standard, could remain at the school until 12 or 13 to take scholarship or Common Entrance examinations.

In April 1988 Mr. Coulbourn retired and the school was bought by Mr Geoffrey R. Williams B. Sc. M. Sc. Mr. Williams was 42 years old, married to Freya and they had three children.

In May 1996 the school was bought by Mrs. Bernice Yvonne Boyton and she was Principal until 9th December 2008 when the school was acquired by Cognita Schools, then under the leadership of Chris Woodhead, former head of OFSTED.