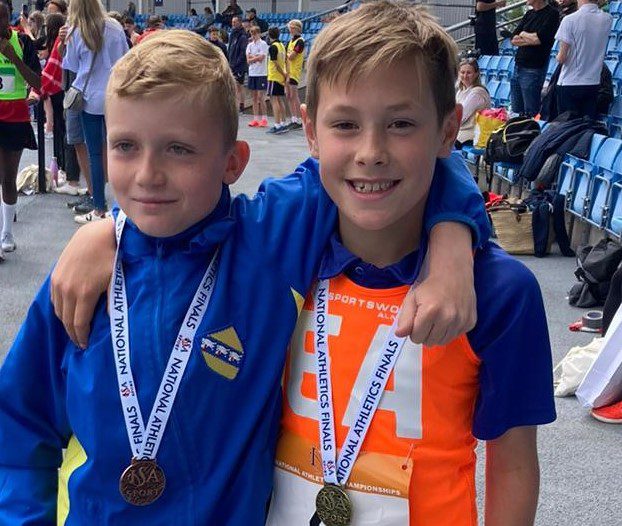 On Monday 13th June 5 athletes and their families made the long trip to Manchester for the annual National Athletics Finals. The children had to qualify for this at the regional qualifiers last month by winning their races or events against the rest of East Anglia. With the 5 competitors being successful in the regionals they would now represent East Anglia in the event and wear the famous orange vest.

Freddie has shown he can throw this year. When he is in goal playing football, when he is on the rugby pitch and most importantly when he is playing cricket. Even this weekend, Freddie got a wicket by throwing the ball 20m+ accurately at the stumps at pace, while fielding. At the regionals, Freddie ‘threw’ through his group, winning the competition by around 8m. I thought yesterday was going to be more difficult for Freddie with him coming up against the country’s best, but I was wrong. He consistently threw over 40m with his best being a massive 47m. This is only 3m off the national record for his age group. He won the competition, bringing home the gold for East Anglia and St Margaret’s, by 10m. Some achievement that is! Top notch Freddie.

As we all know, Heidi is a champion. Triathlon, cross country, athletics, she does it all. This year was no exception with her flying through the regional qualifiers winning her race by some 100m+. With a lot of mental and physical preparation for yesterday’s event, we knew that Heidi was ready to compete. Heidi got a good start in the race and led the pack from around the 50m point. As she came passed me, around the 200m mark, she was well out in front. As the race progressed around the next bend and up the back straight, you could see the athlete, who represented London West, was catching up. Around the final bend we went, and they were neck and neck going into the final straight. Unfortunately, shielded from the wind, the London athlete took the lead and gave Heidi second place. As she crossed the line, we knew that Heidi was about to add another medal to the collection. 2nd place in a time of 1.53 is something to be immensely proud of. Big things to come from Heidi as she progresses through the coming years at her next school, watch this space.

Mya has shown some real promise with high jump this year and she has been consistent in lessons. This meant that when we went to the regional qualifiers, she went through on countback and a jump of 115cm. As a result of her showing promise in high jump, she has been working with Mrs Skedd in athletics club and has also been having help from outside of school. Yesterday, Mya started with a brief warm up, using the indoor facilities, and tried to get used to the increased size of the landing area. This was a bit of an adjustment for Mya, and she coped with it well. In the competition, Mya had some good jumps and managed a height of 105cm meaning she came joint 3rd in height cleared.

Louis has developed a real understanding of the 600m across this year and is starting to grasp and demonstrate his control within a race. This was on show in the regionals where he timed his race to perfection and won it on the final straight. Yesterday, Louis came up against the rest of the country’s best and learnt a few more vital lessons about race management. From the very start of the race, you could see that it was not going to be a clean race with Louis being pushed around and to the back of the pack. This meant that his strategy was going to have to change. After the first 200m Louis started to make his way to the front and across the next 200m he found himself in 4th with a chance of a medal. The question was, did he have enough in the tank to finish strong and get passed the child in 3rd? With a hard-fought battle down the final straight, he did it, he took him 5m from the line and took the bronze medal. Well done, Louis.

We that found Matilda had a raw talent for ball throw in lessons and realised that, with some training, she could have a shot at the regionals. When she qualified for the nationals, we were overjoyed, and this is when Matilda took it into her own hands to order a rounders ball off the internet and start practising in the park with her dad. When practising for the national finals, Matilda informed me that she was sometimes throwing between 36-38m in the park and was starting to see some more consistency. When it came to yesterday, Matilda put down some good throws but none quite as long as the ones that she has done at school, in the park or in the regional qualifiers. The results on the day, with a throw of 25.97, meant that Matilda came a very respectable 6th.

With every one of our children gaining points for East Anglia and contributing to the final scores our region did very well. The country is split into 7 sections, The North, The South, The Midlands, East Anglia, The South West, London North, London South and London West and these were the junior results: