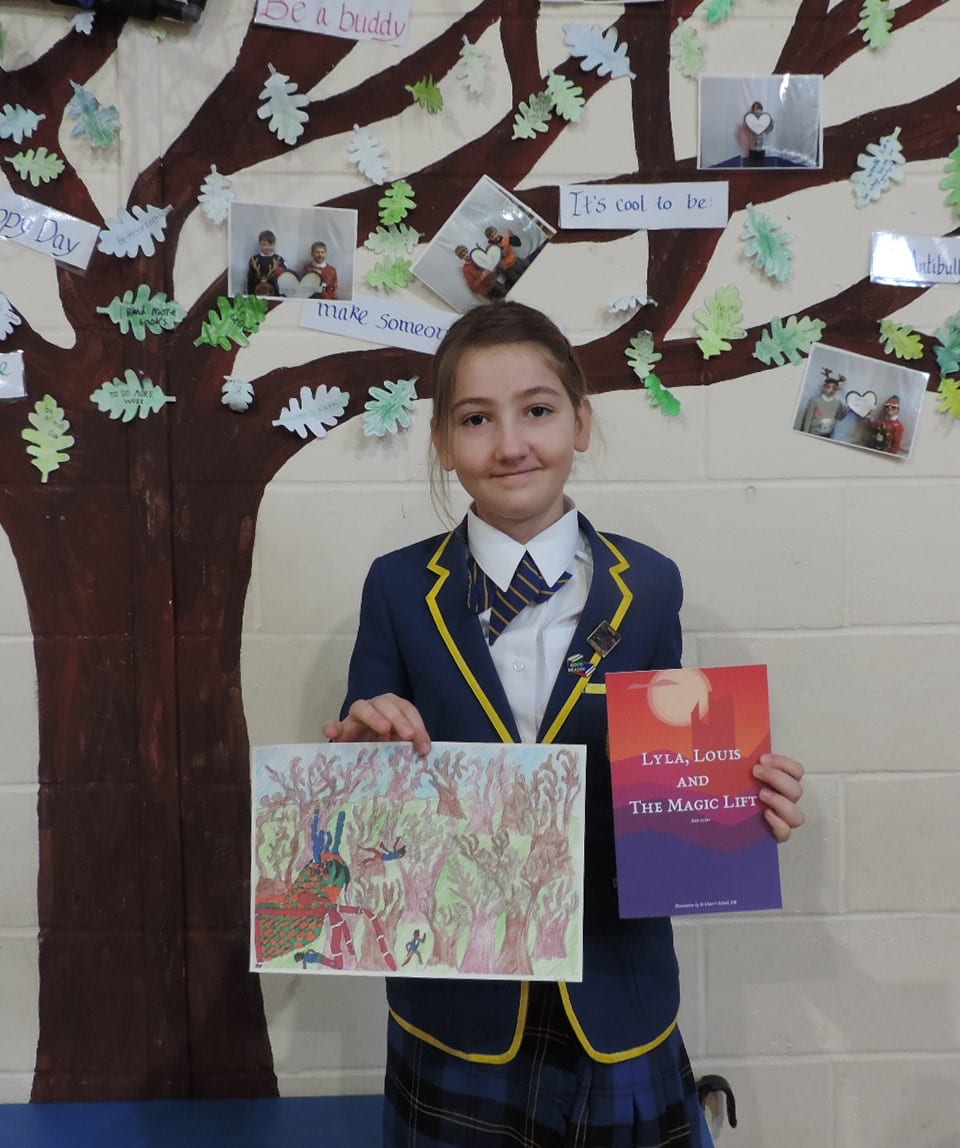 We’re very proud of Lily, whose picture has been included in a published book as part of a global project involving over 50 Cognita schools in Asia, Europe and Latin America. Hundreds of children have collaborated to create Lyla, Louis and the Magic Lift – a unique and fantastical book aimed at 10 and 11-year-olds, which was released to mark World Book Day.

This is the second year that Cognita has run the grassroots Share A Story project – bringing together students over three continents to write an epic adventure in English and Spanish.  This year, celebrated children’s authors Anne Fine and Jeremy Strong are supporting the project;

“Such an appealing idea – young writers reaching across continents to create and share a story. And just as the tale itself has to hang together, so it also connects dozens of schools from all over the world. A terrifically ambitious project!”Anne Fine, former Children’s Laureate & best-selling children’s author

“What an extraordinary story! Here is a terrific example of cross-cultural cooperation with children from over 50 schools uniting in the writing, illustrating and translating. What a story it is too, with unicorns, dragons (one of them part chameleon!), mermen, trolls, not to mention poor long-suffering PE master, Mr Longsocks. It’s a delight to read and I congratulate all who have taken part. Let’s have more!”Jeremy Strong, best-selling children’s author

This year’s book is a wonderfully mythical story which takes siblings Lyla and Louis, and their PE teacher, Mr Longsocks, on a thrilling journey where they meet the most extraordinary creatures; from raging alicorns to angel llamas! Our protagonists tackle cloud worlds, dastardly dwarves and spooky caves, to learn a valuable lesson in self-belief, courage and love.

“St Margaret’s was invited to illustrate the part of the story about ‘the monster in the forest’. I am incredibly proud of Lily for how much time and effort she spent on her picture. To be chosen from so many entries is a real achievement and much deserved.” Mrs Howells, Head of Art at St. Margaret’s Prep

Teams of children from dozens of Cognita schools were involved in writing the book – with each school taking on a chapter or illustration before passing it on to the next team. Over 10 schools also tackled the job of translating the story into Spanish.

The Share A Story II project was co-ordinated by Cognita teaching staff member, Joe Woodhouse, from the British School of Barcelona in Spain; “We set the children a specific challenge this year; to write a story with ‘wellbeing’ at its heart. We wanted the main characters to have physical or cognitive differences which can often be seen as obstacles, and then radically change readers’ perceptions by making these differences the superpowers that helped the characters overcome the problems they faced. Our hope is that in turn, it teaches us all to celebrate our differences more. We’re so proud of the wonderful story they have produced.”

The illustrations were co-ordinated by Christina Harrow at the Australian International School in Singapore and the translations by Nicole Ford at The English Montessori School in Madrid, Spain. The team also had expert illustration advice from award-winning illustrator and author, Karin Littlewood.

“Illustration is such a powerful, universal language and its visual impact is just as important as the written word. When the day came for the final judging, I was so excited to see the illustrations – they were amazing! Wonderful, imaginative and strong, from different countries, cultures, schools and year groups, drawn and painted with thought, skill and a huge dose of enjoyment shining through. I can’t wait to hold the final book in my hands!” Karin Littlewood, award winning illustrator and author